Of woes and toes. 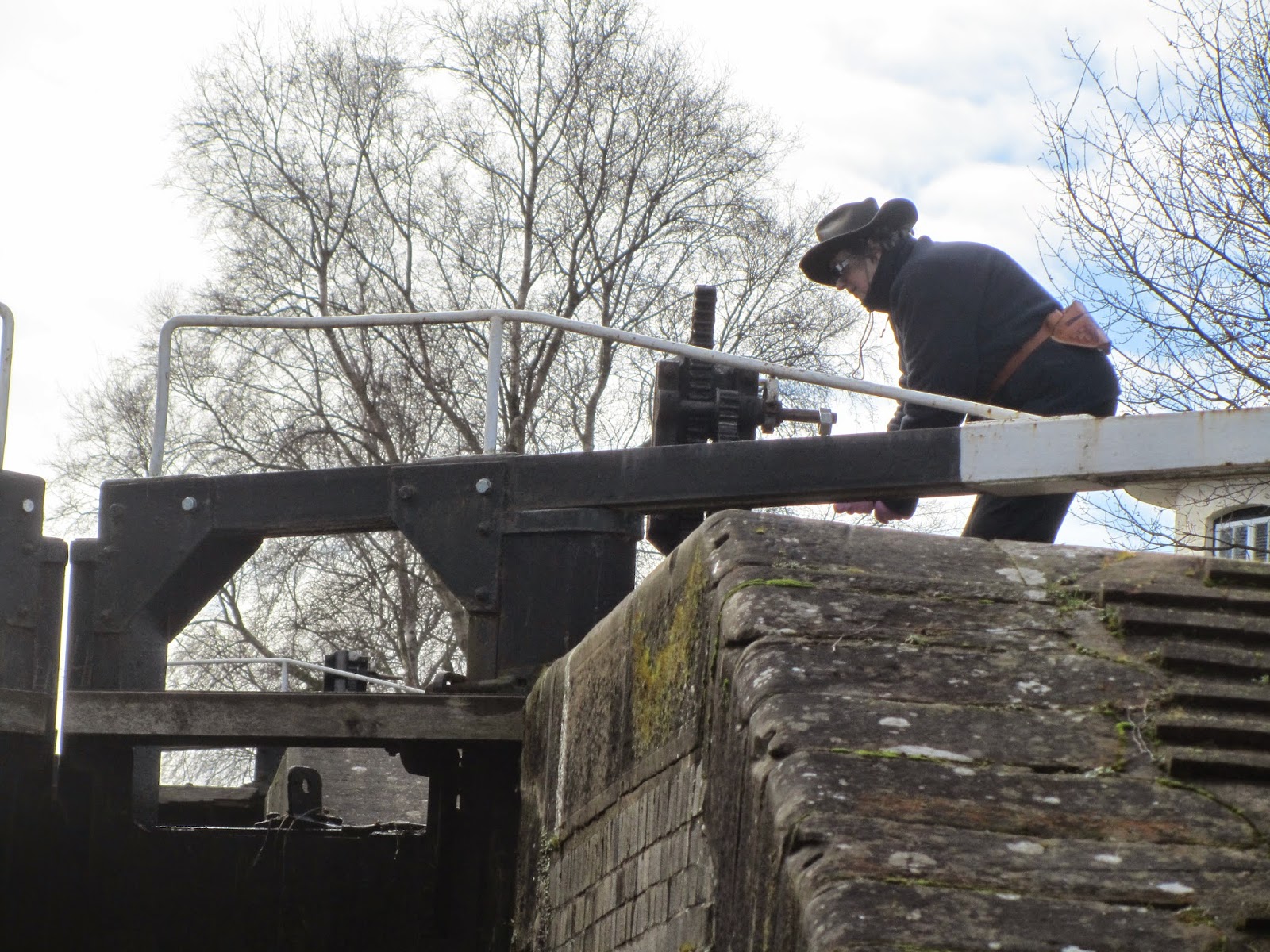 Let us start with the woes. This is about as far up the Welsh canal as we got, Grindley Brook staircase.
Since mid January we had noticed water in the cabin bilge. We have a nicely designed hole in the floor of the wardrobe which I occasionally glance down, normally dry and fine but now damp. Since then, by a process of elimination, we have worked out it has to be a leak in the fresh water system. One give away is the way the water pump has now started cycling. A brief run every one hour and twenty minutes.
So I started searching for the leak. Around the pump, dry. All connections under the kitchen cupboards, dry. Around the calorifier under the bed, dry. This left one further area, under the shower room. This is a swine of a place to get at, involving dismantling an ungetatable cupboard. After much bad language and effusion of blood it was achieved. 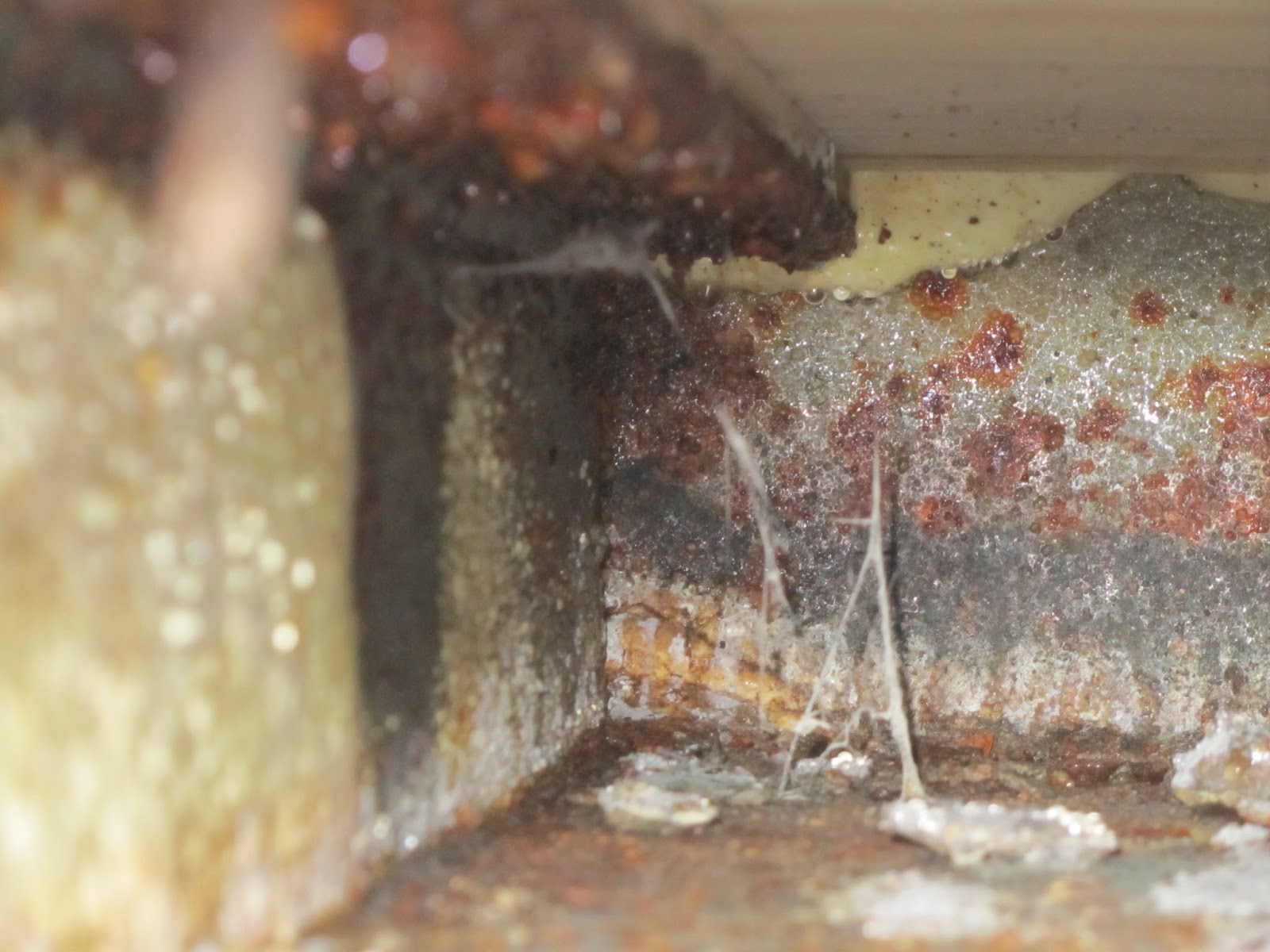 Quelle horreur!
It was a boaters worst nightmare. Water had obviously been collecting in this inaccessible spot for some time but of the leak itself there was no sign. Pipes to the shower head were dry, no sign of water around the shower pump or the base of the shower tray. To put it politely, I was stumped. Outside help was needed. Local boatyards proved less than helpful so a quick 'phone to call to our friends at Norbury Wharf and we were retracing our steps.
With one all day stay at Nantwich, shopping and the Welsh Open Snooker final, we made it back in five days. It had taken us that many weeks going out, shows how fast we normally travel.
So here we are, back where we started from about six weeks ago. Inspection of system by Mick tomorrow. I have a horrid feeling that the entire shower is going to have to come out.
And on to toes. A few days back my dear lady opened one of the store cupboards and a kamikaze jar of Pataks finest Madras hurled itself onto her left ankle leaving a nasty bruise. The jar was given a stern talking to and restored to its rightful abode but the wily oriental was not giving up yet. A couple of days later it once again launched a vicious attack, this time achieving martyrdom and leaving broken glass and curry sauce all over the carpet and Jill with a horribly bruised left big toe and a black toenail. She is hobbling yet. Luckily she has not lost the nail.
I shall attempt to keep posting updates but Norbury Junction is not noted for signal strength.

We sat out Friday's wind and rain and yesterday was the Six Nations. As predicted we gave the Italians a good sorting out. Mind you they gave us a bit of a scare early on by putting a try over in the first few minutes. We are going to have to watch the Irish though, they have a really good team this year. 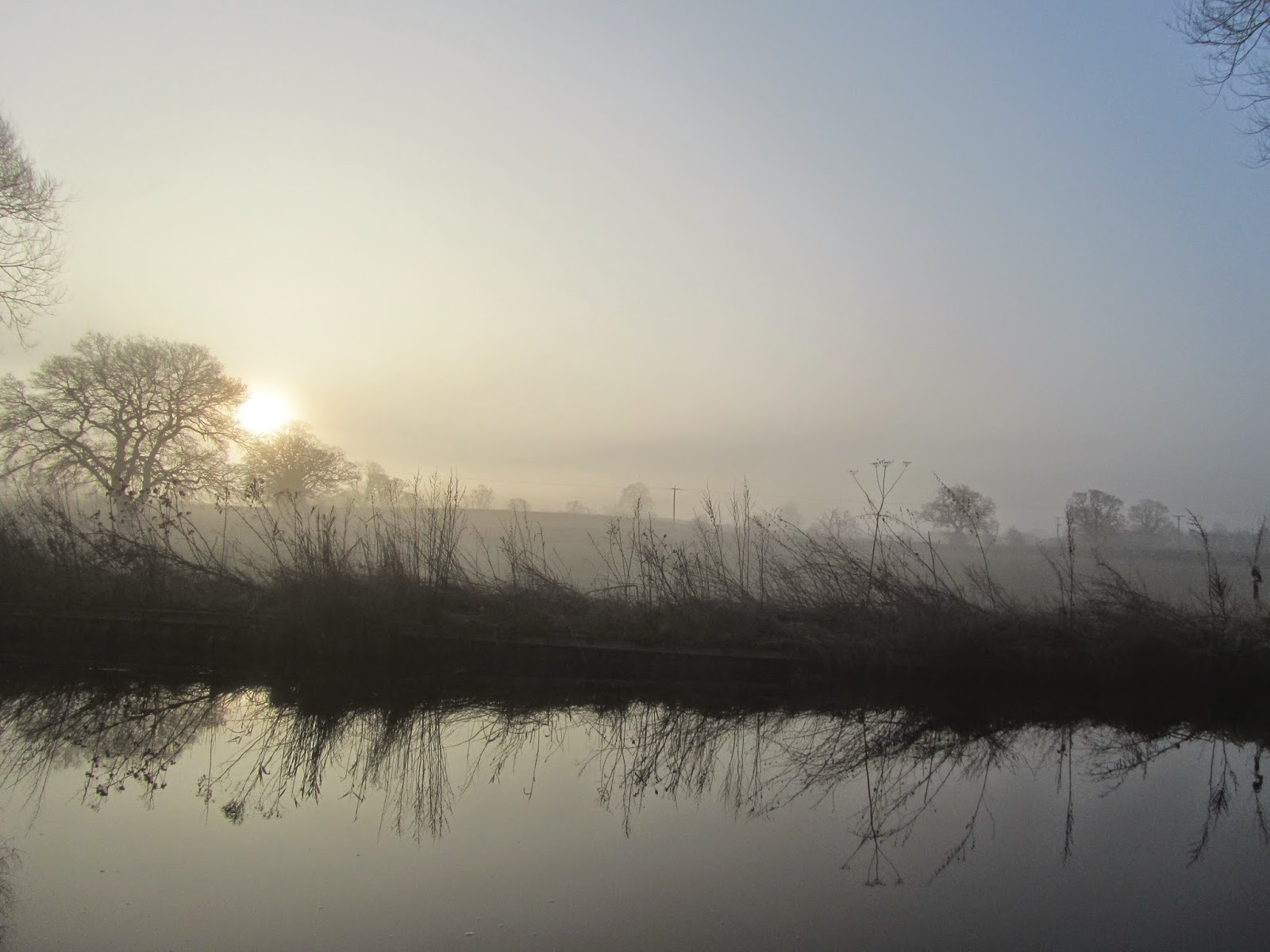 This morning I arose with the sun. It was just clearing the hill as I peered blearily out of the side hatch. 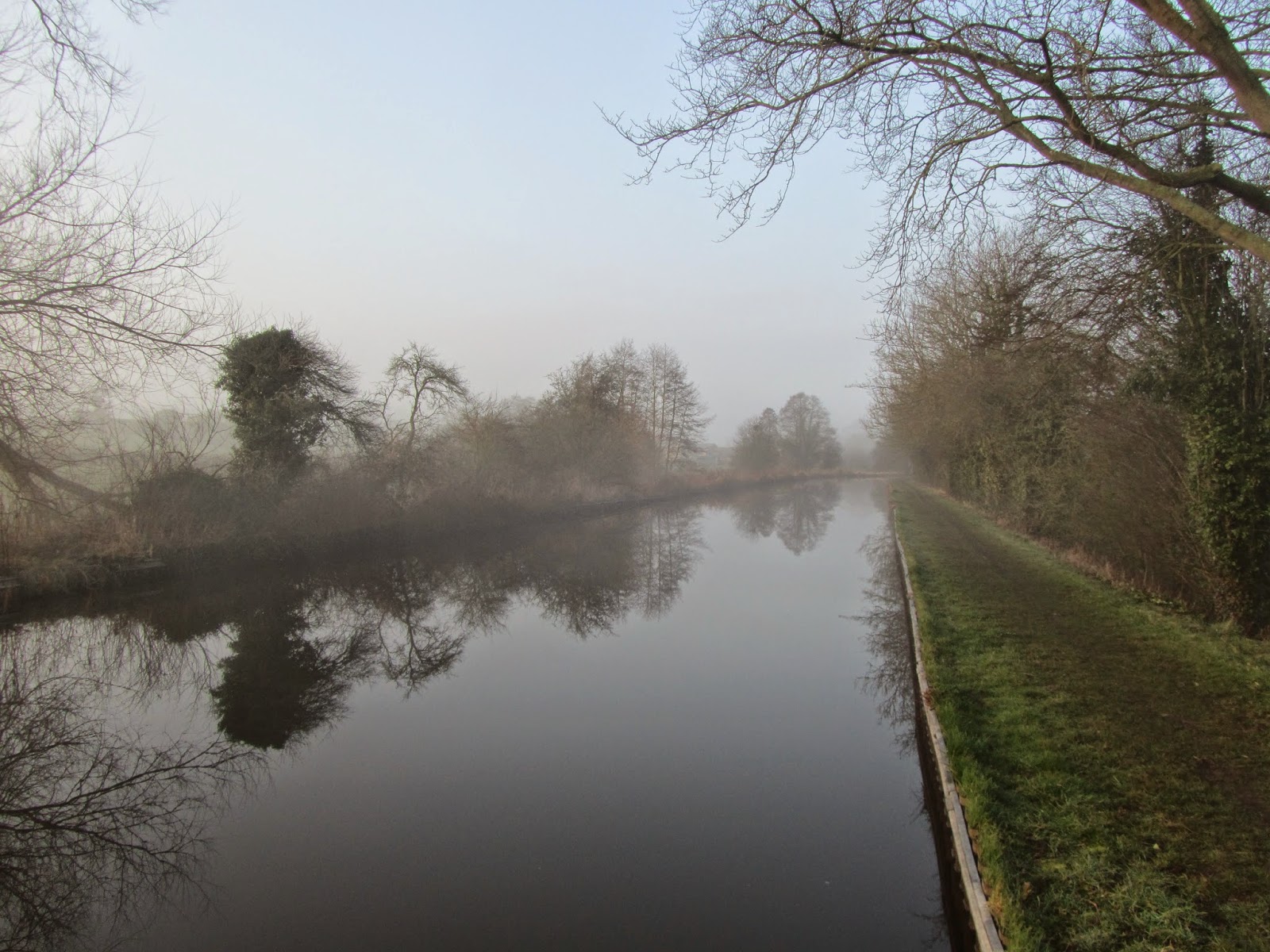 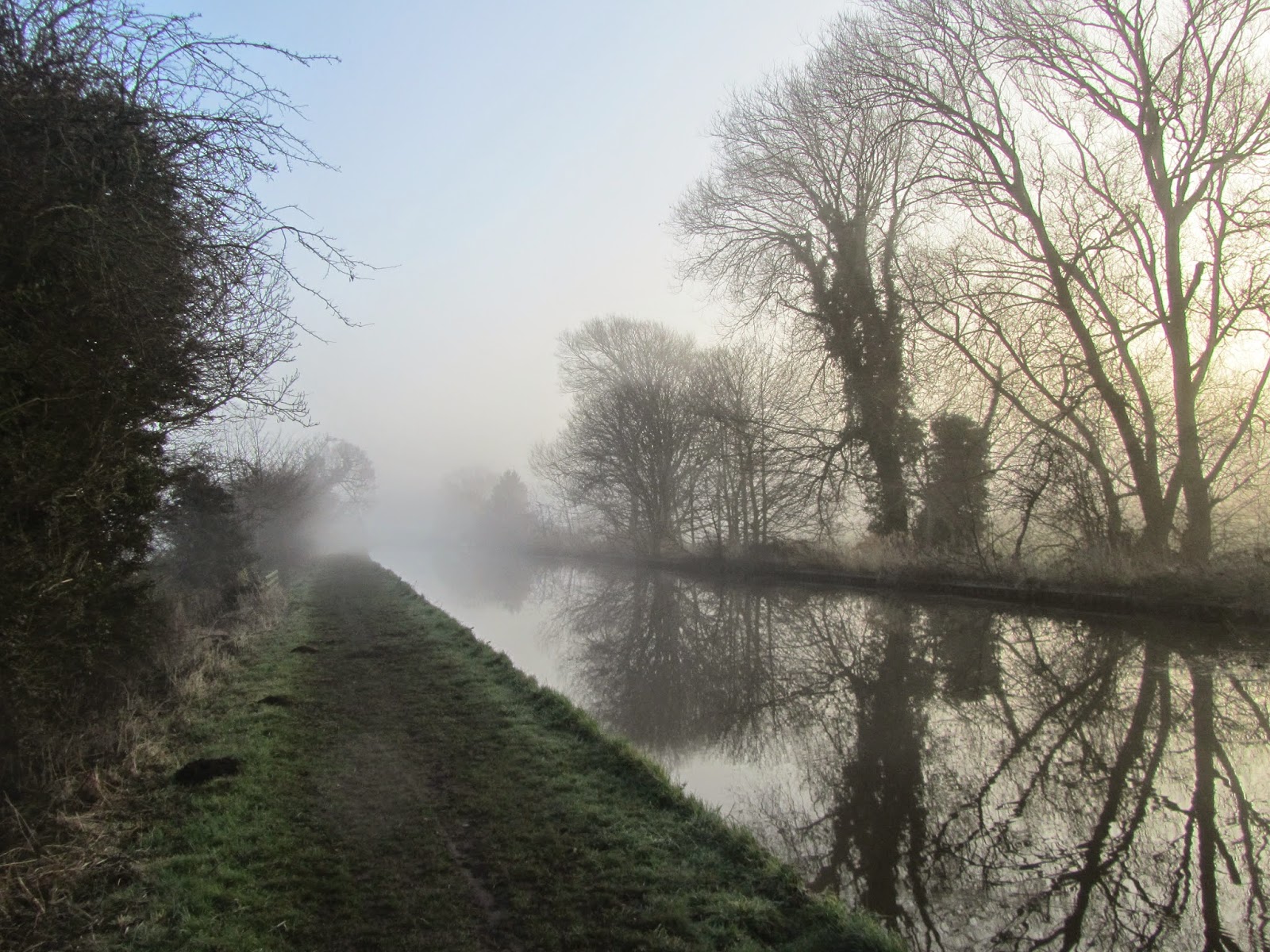 It was a fine winter's morning, mist across the meadows and a clear blue sky above. 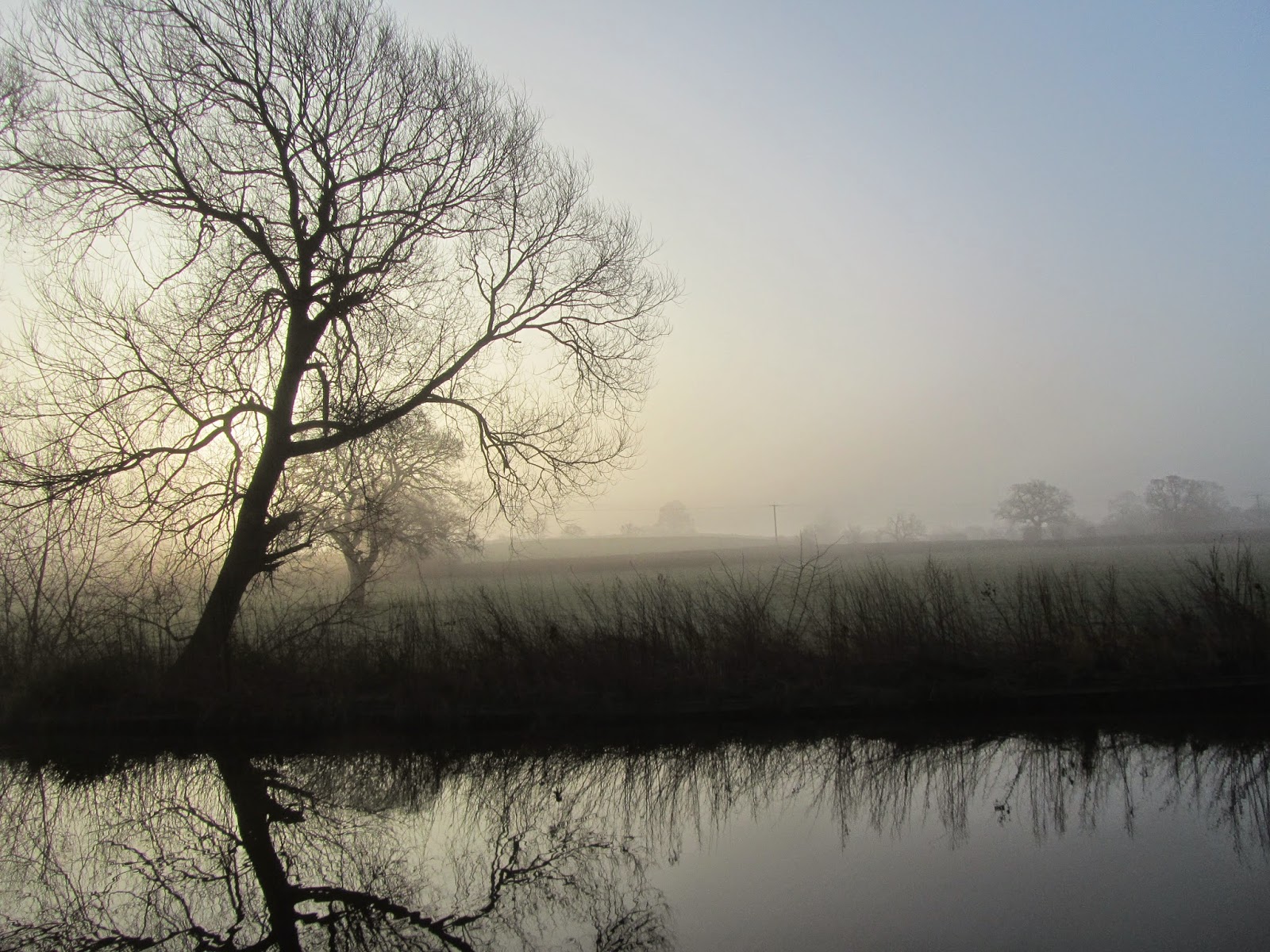 It is all change now though, the low clouds have moved in and the sun has disappeared.
It looks as though we are staying put for another day or two, Scotland v. Wales today and tomorrow is forecast to be wet with howling gales.
Tuesday?


Posted by Graham and Jill Findlay at 10:39 No comments:

After a restful day at Burland, we set off for Wrenbury. At Swanley no. 2 lock there was an interesting C&RT notice pinned to one of the top gates. 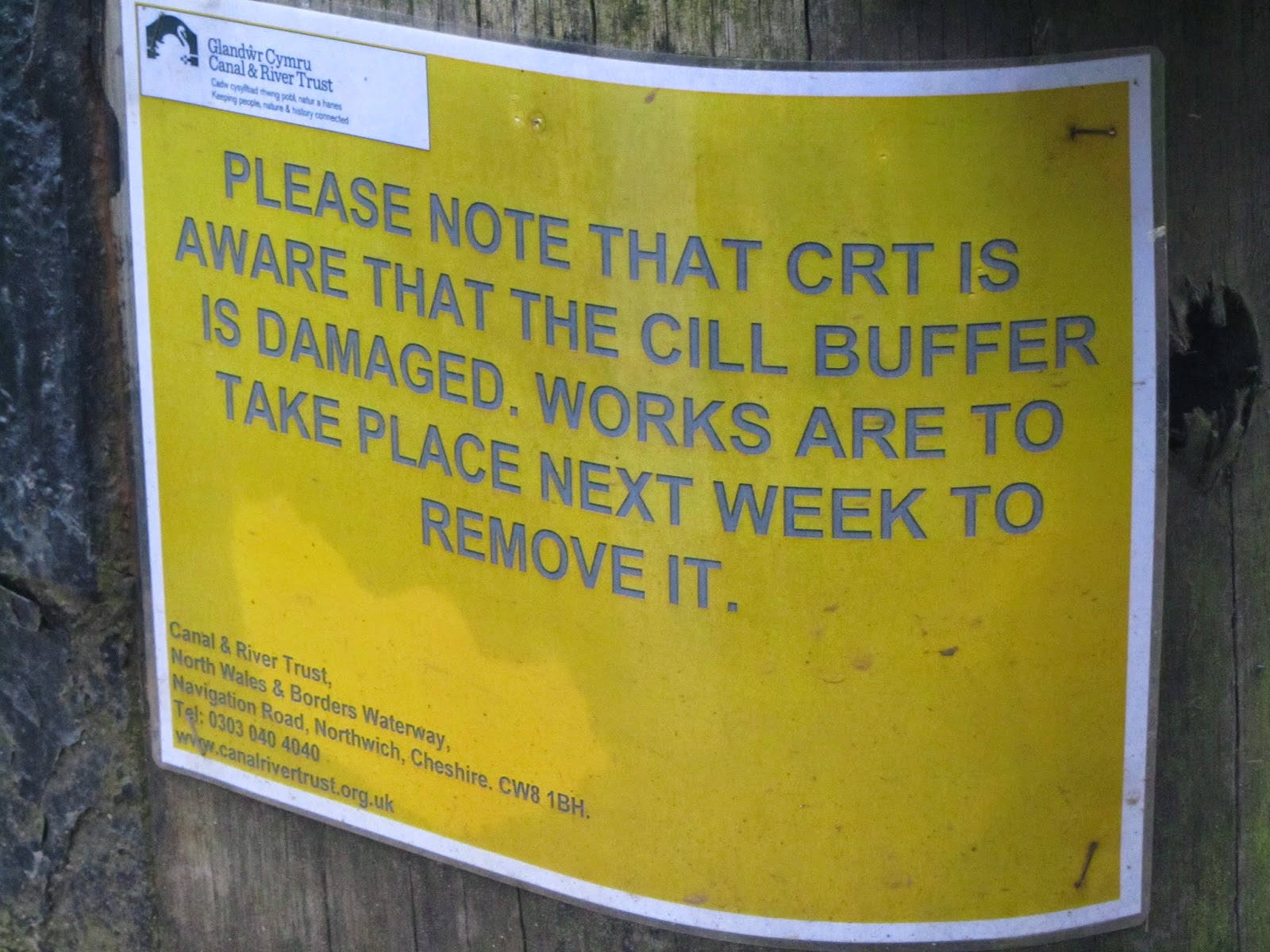 Observe that there is no date on the notice, so to which week does it refer? How long has it actually been there? 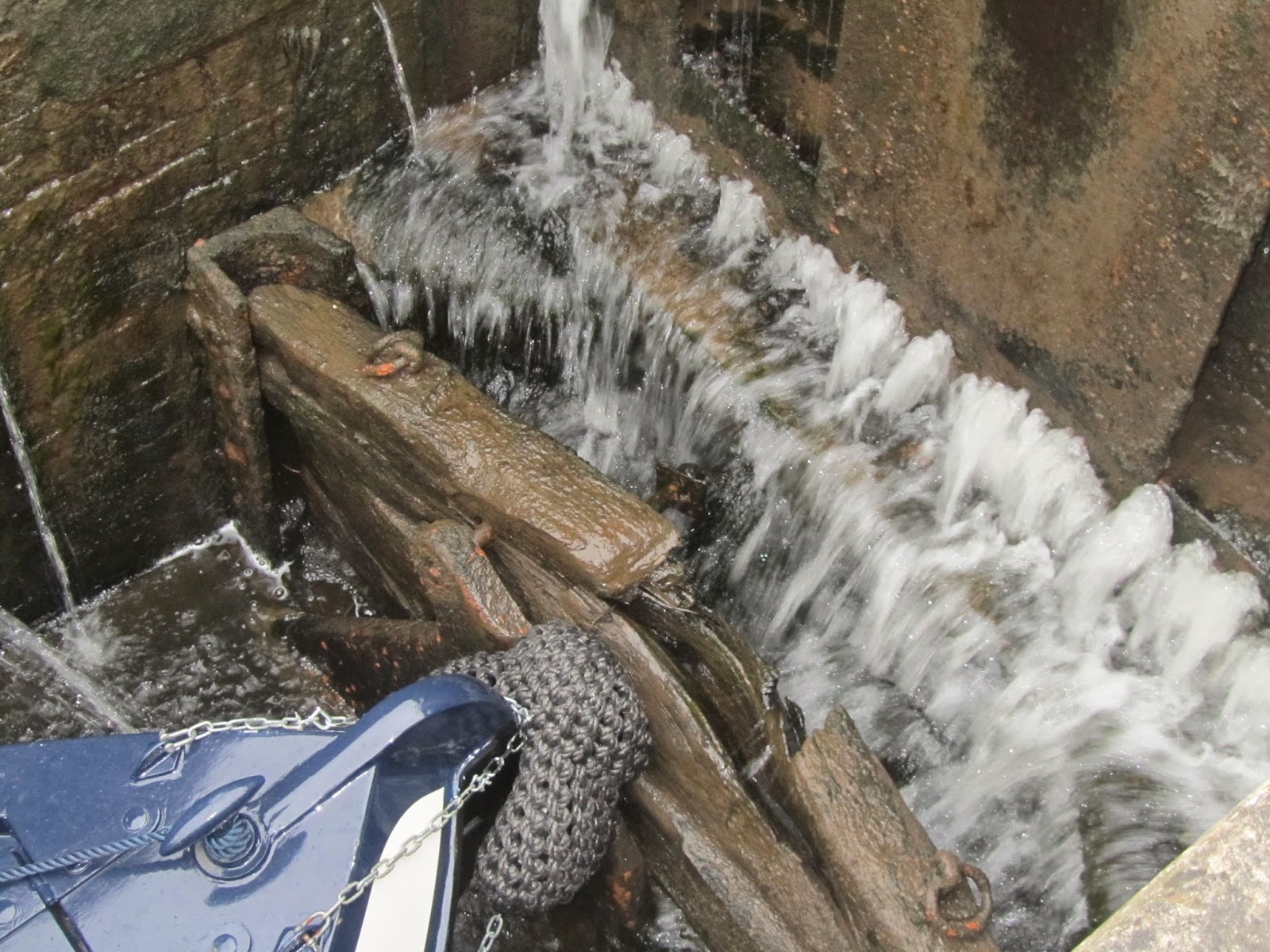 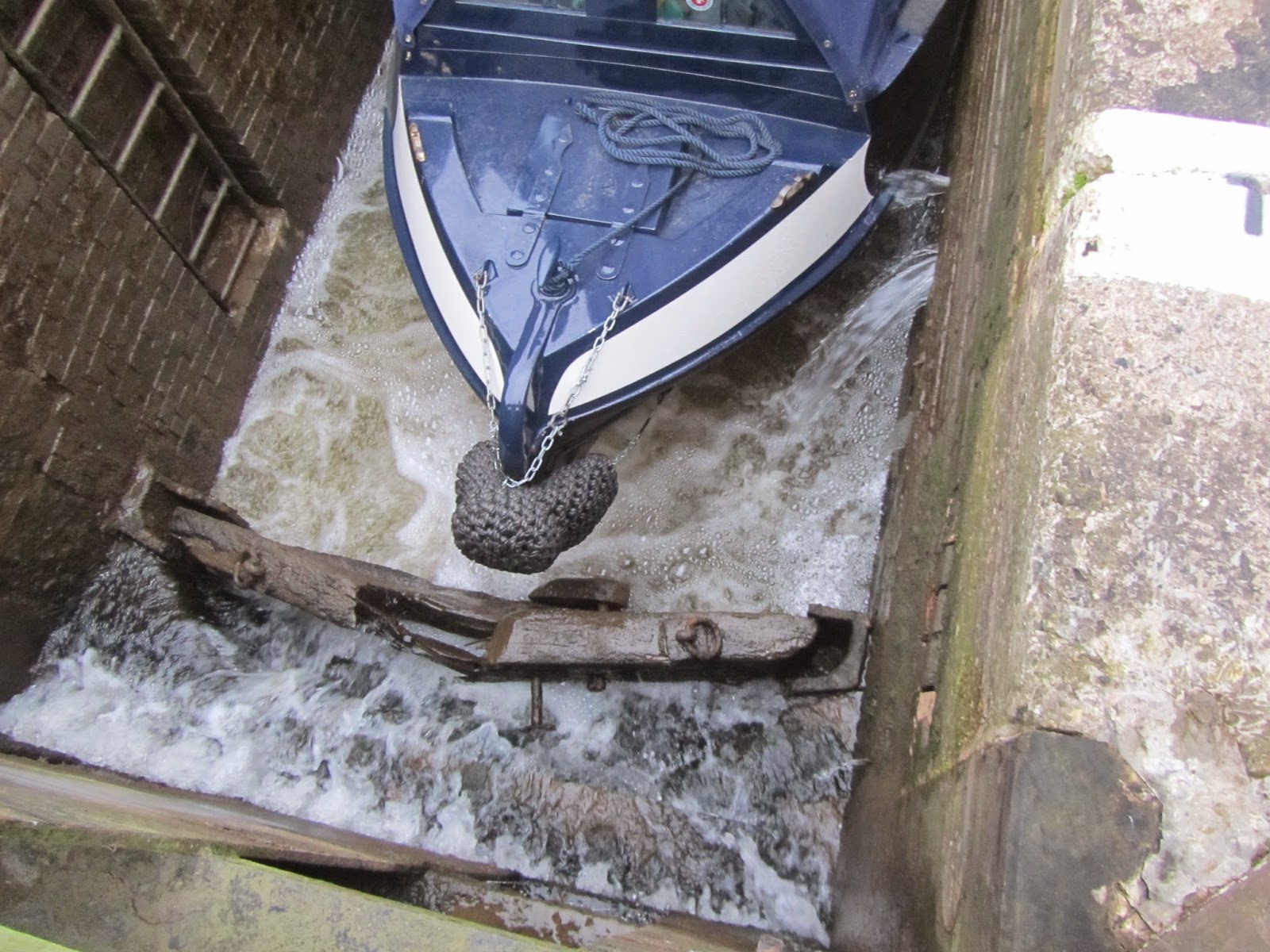 Yes, it is definitely broken, hopefully they will replace it, rather than just remove it.
Whilst on the subject of dubious signs. 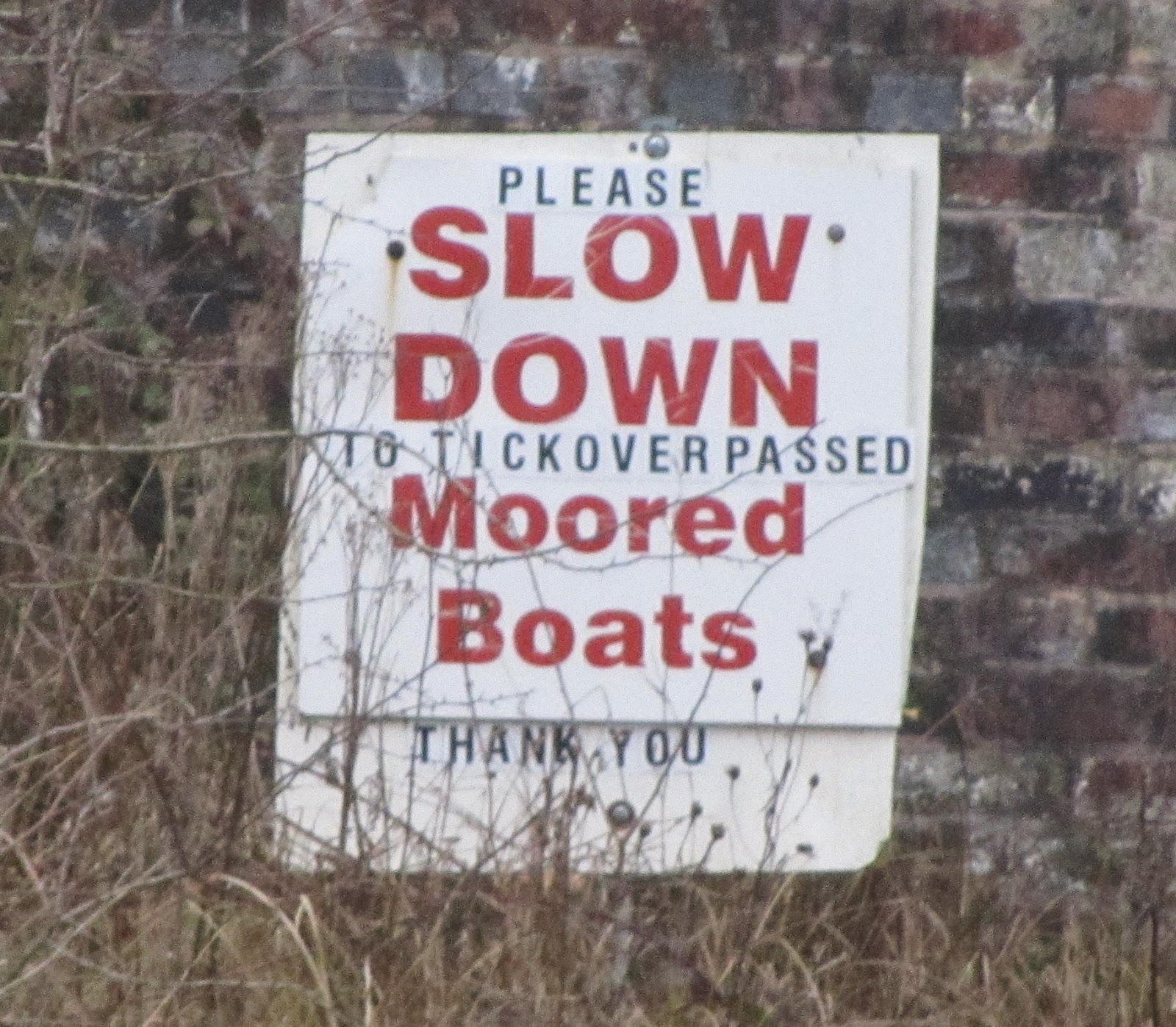 No, no, no. What have the boats passed? A G.C.S.E? The correct wording is, "Whilst passing." I have been called a pedant before now. It's probably an age thing. 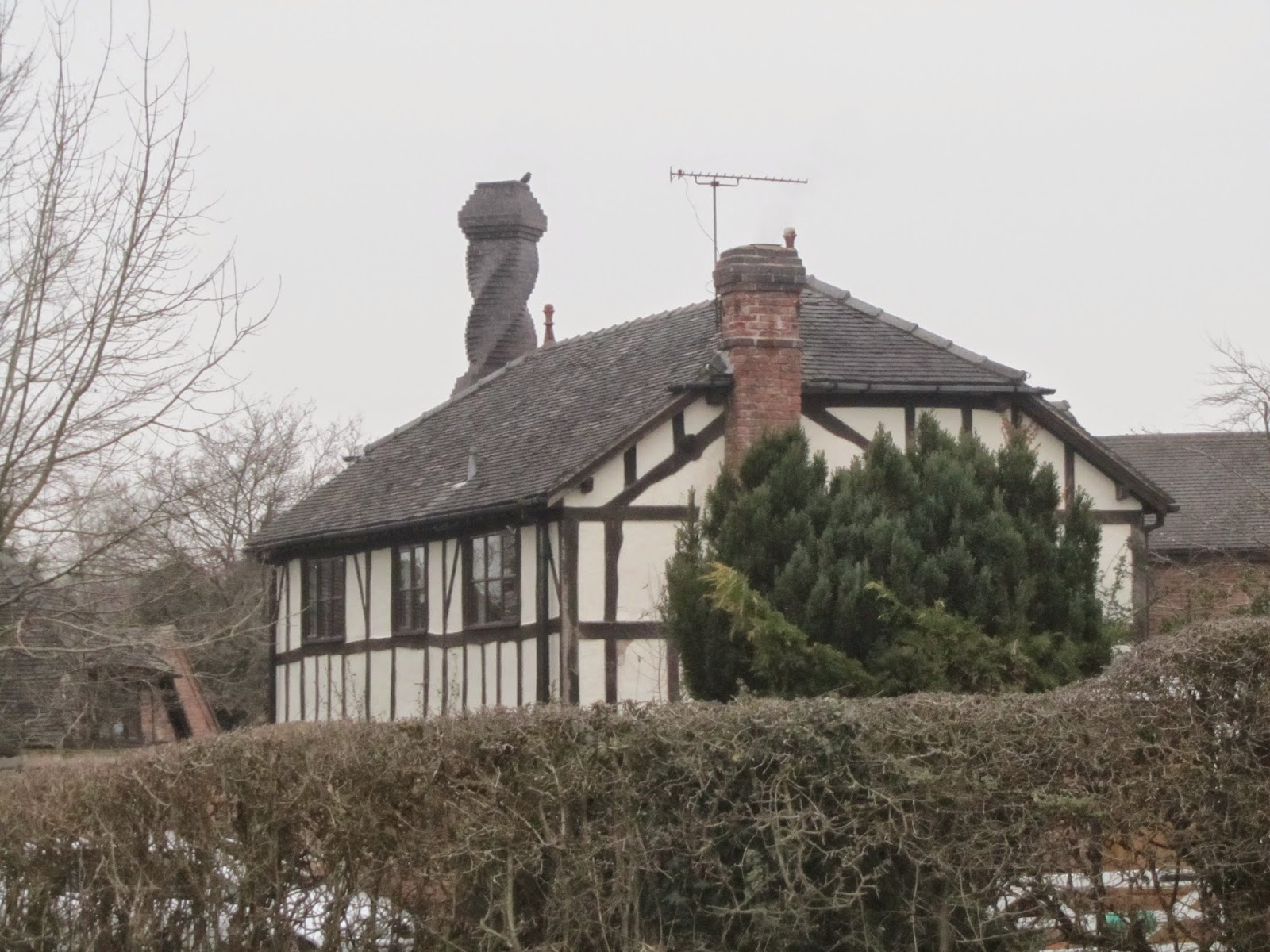 Love the chimney, I wonder if they just built it on the ground and then screwed it into the roof?
The Welsh canal is actually an artificial branch of the River Dee, taking its water at the Horseshoe Falls at LLantisilio and feeding the reservoir at Hurlaston. This means there is a constant flow down the canal. It is most noticeable at locks where it runs down the by-wash at a fair rate of knots. 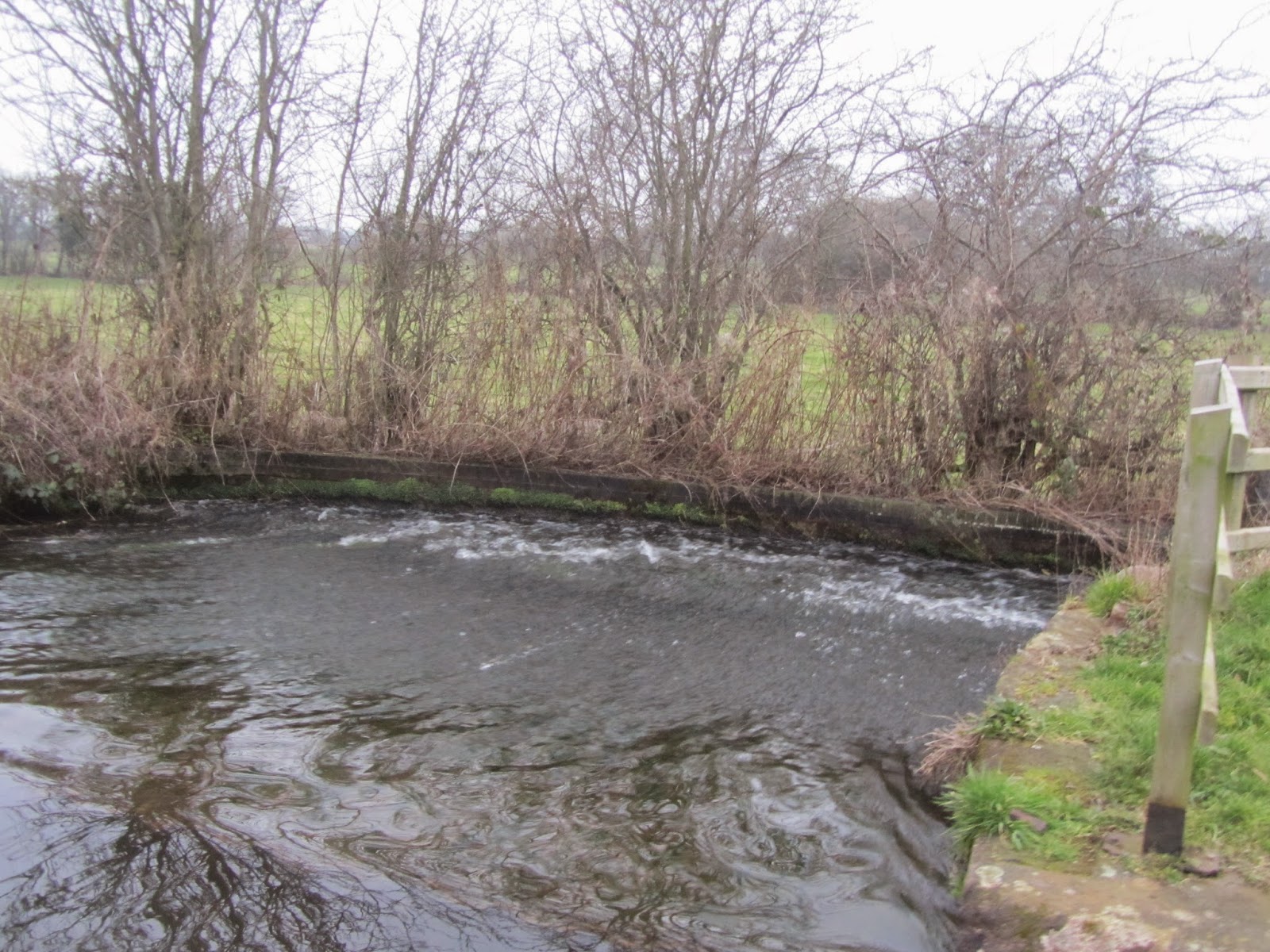 Over the top and then 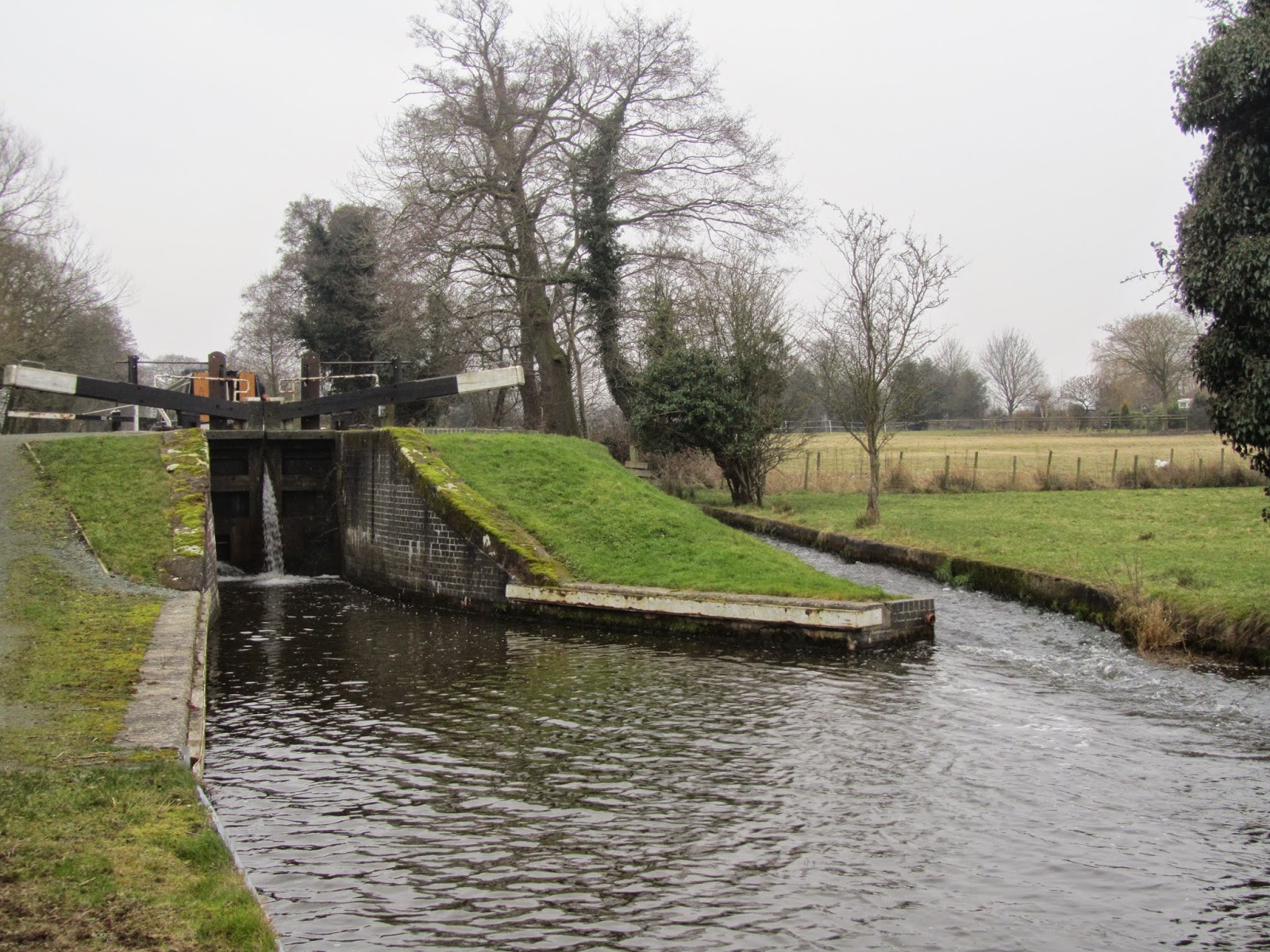 out at the bottom, usually just at the point where you need good control over the boat to avoid contact with the lock walls. The art is to get over to the offside and allow the water to push you into line with the gates as you approach. It doesn't always work though.
As we approached Wrenbury we encountered the first of the lift bridges for which this canal is well known. 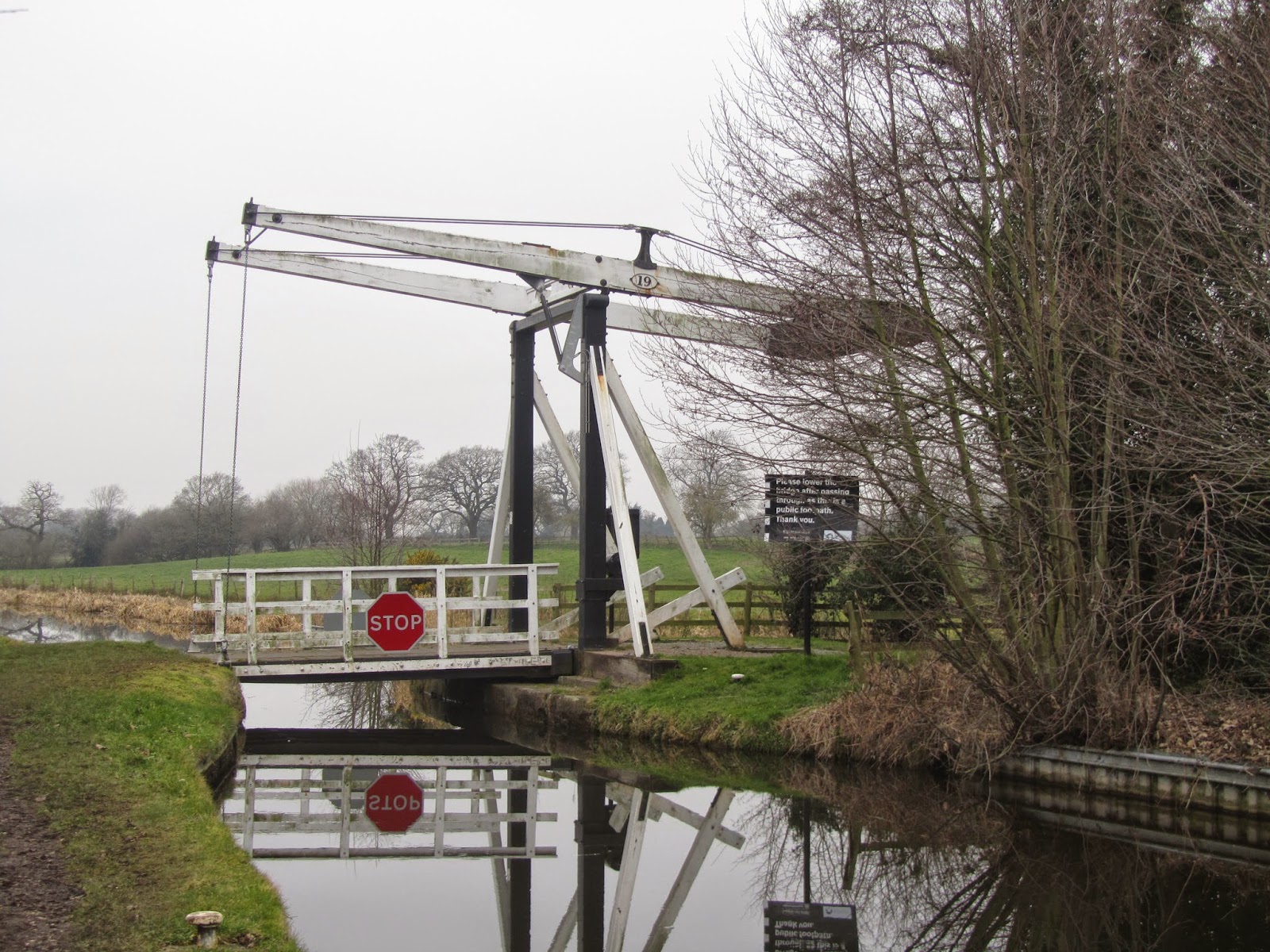 A swift thirty-six turns by Jill on the hydraulic gear 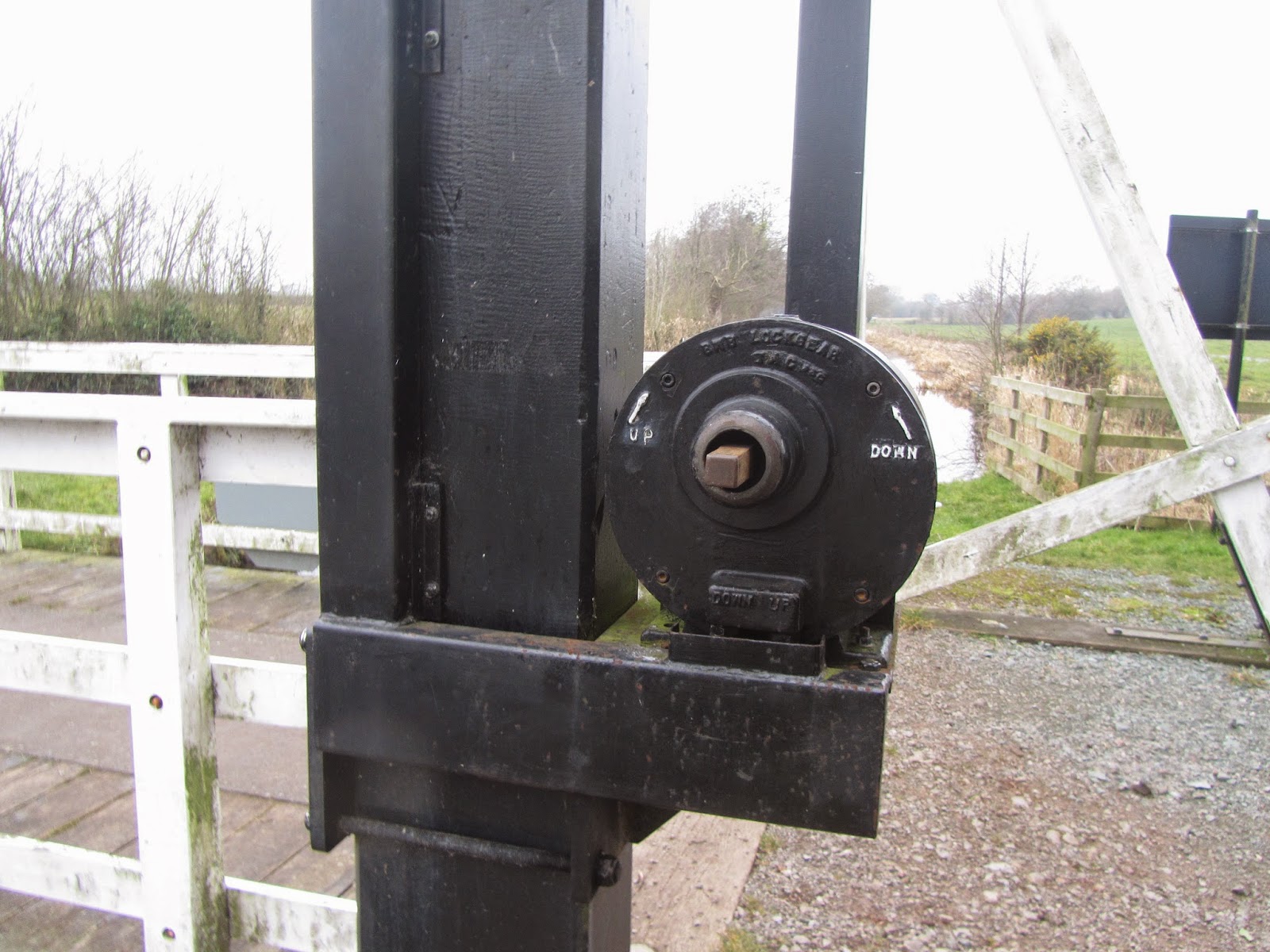 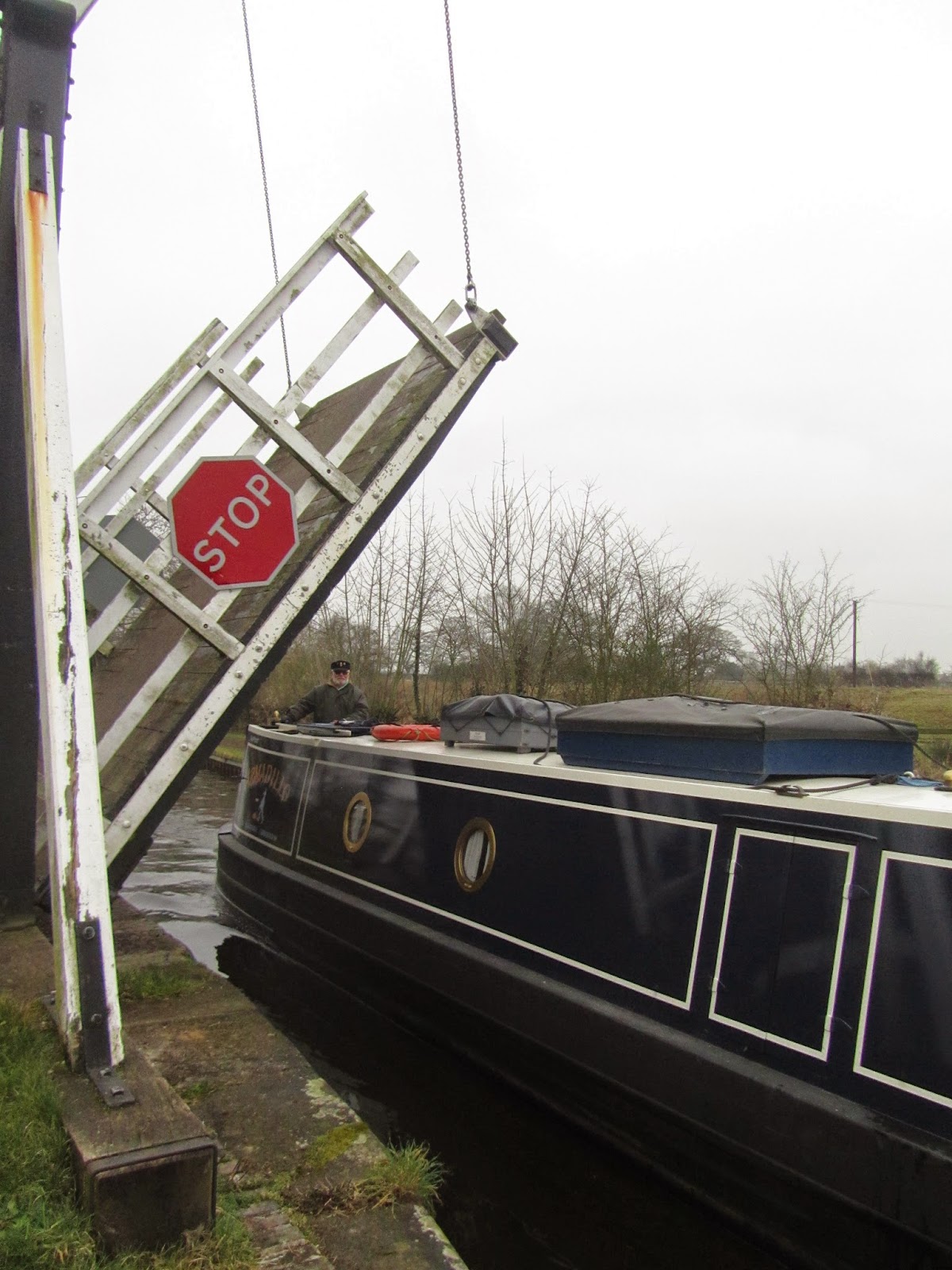 and a bit of nifty steering by me and we were through and onto the moorings. Just a short but muddy stroll from The Cotton Arms where we lunched on superb sandwiches with a well kept pint of Hedge Hopper. After a post prandial nap on board we we readied ourselves and by seven p.m. we were dining at The Dusty Miller. The occasional day of excess does no harm. 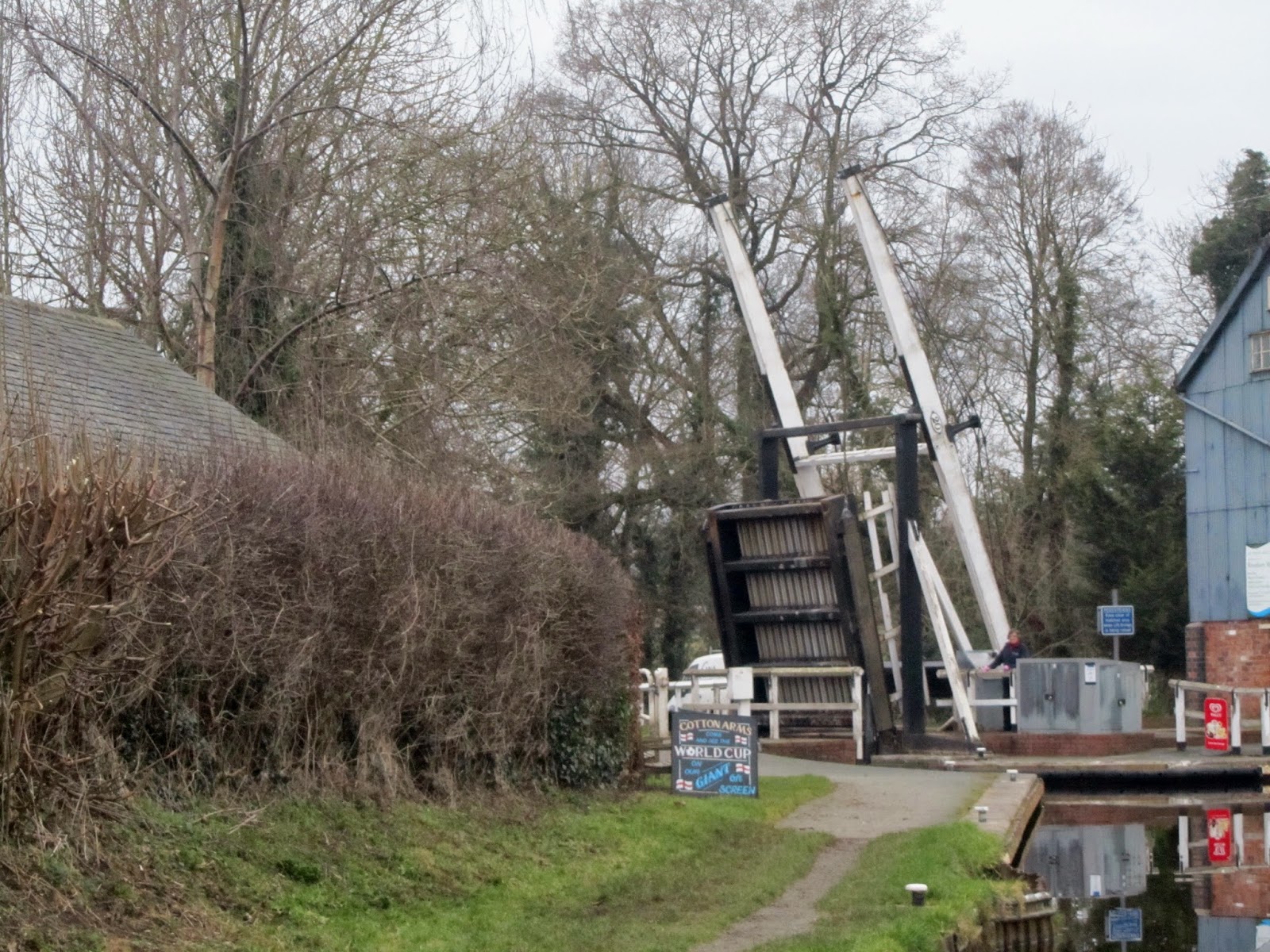 This morning we negotiated the next lift bridge, this one electrically operated and on a road. We scored nine cars and a cement truck.
We haven't travelled far today, only to just above Marbury lock. Weather forecast not too good for tomorrow and the Six Nations at the weekend. may well be Monday before we move.

We finally start moving on. Hurleston with daffodils.

Winter is such a quiet time, we have been sitting at Nantwich since the twenty-eighth of last month and you could count the number of boats we have seen moving on your fingers. Largely down to the frozen state of the canal. 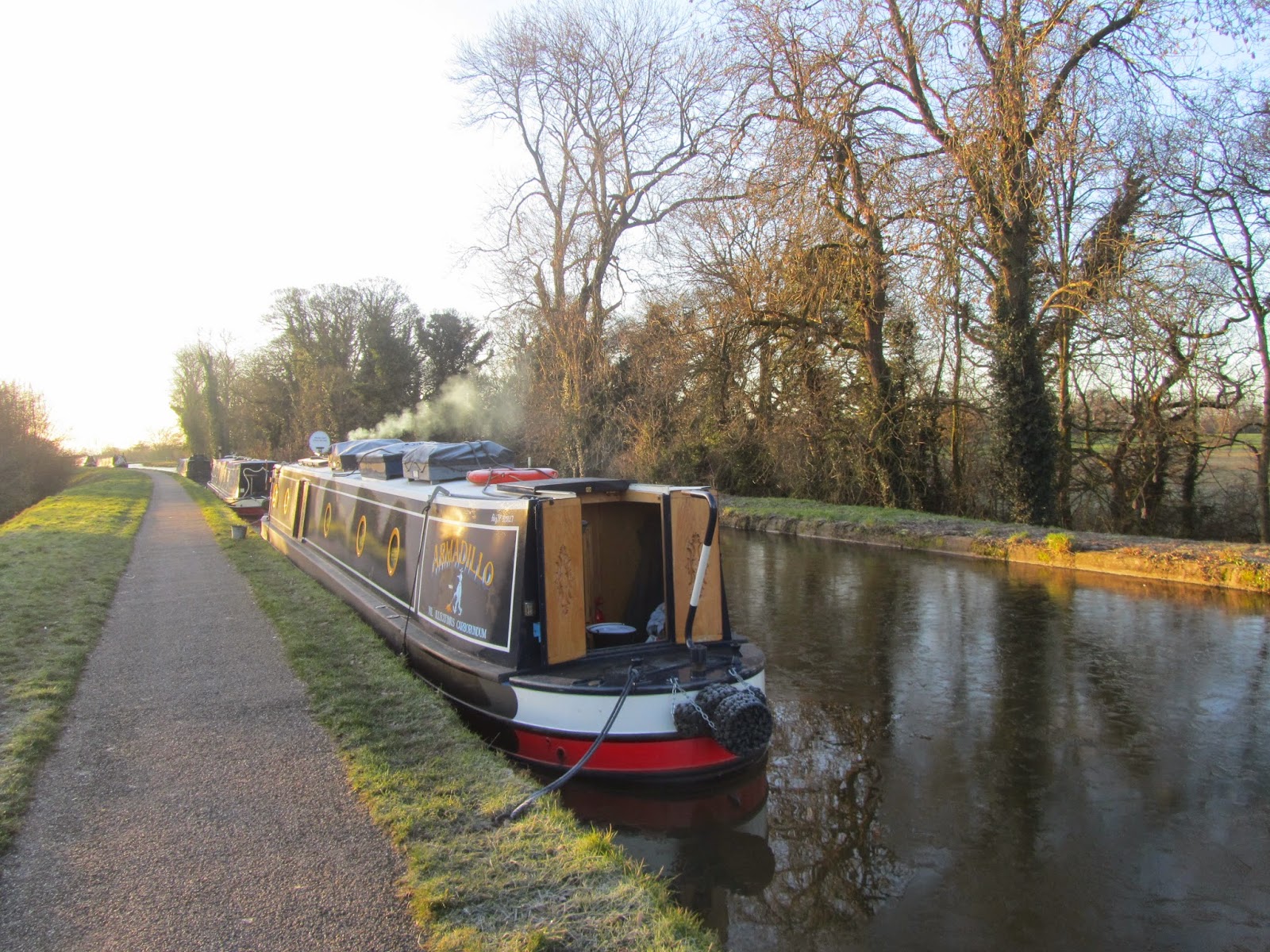 Honestly, that is ice across the cut. We stayed a couple of days after the ice went because, anticipating it lasting longer, we arranged a visit from our nephew and his good lady on Saturday which of course was a signal for an instant thaw.
But today we finally set off for Hurleston and the Welsh Canal, a.k.a. the Llangollen. You may pronounce that as you see fit. Stopped at Nantwich Canal Centre to top up the diesel and were informed that Hurleston was shut until the twenty-second. A rapid check on C&RT's website showed no mention of a stoppage so we set off, hoping. As they say, "It is better to travel in hope than to arrive." We did both. 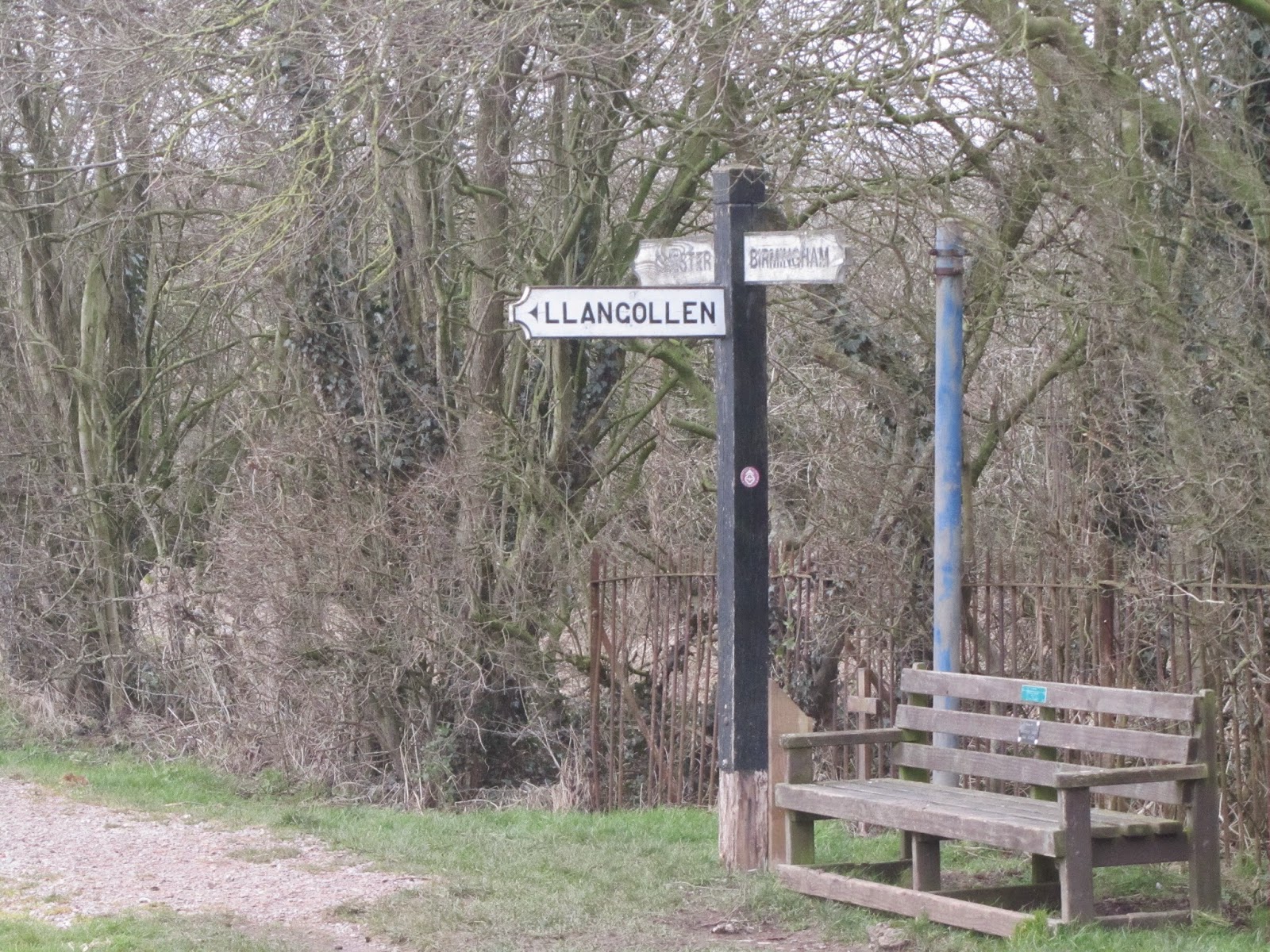 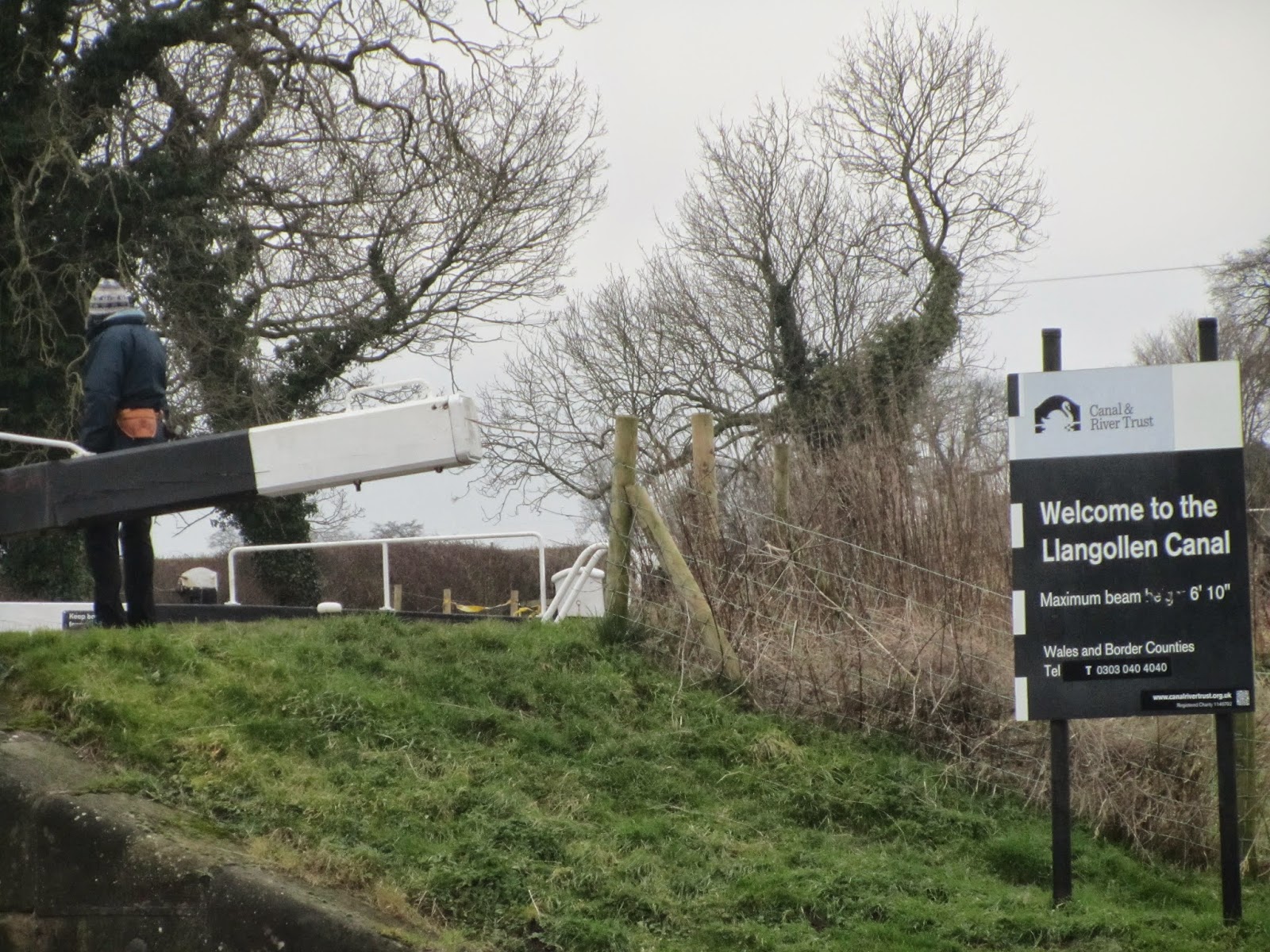 Well we arrived at the bottom of the four locks of the Hurleston flight and apart from a couple of work boats moored on the lock landing there was no sign of any work being done, so we set off up. 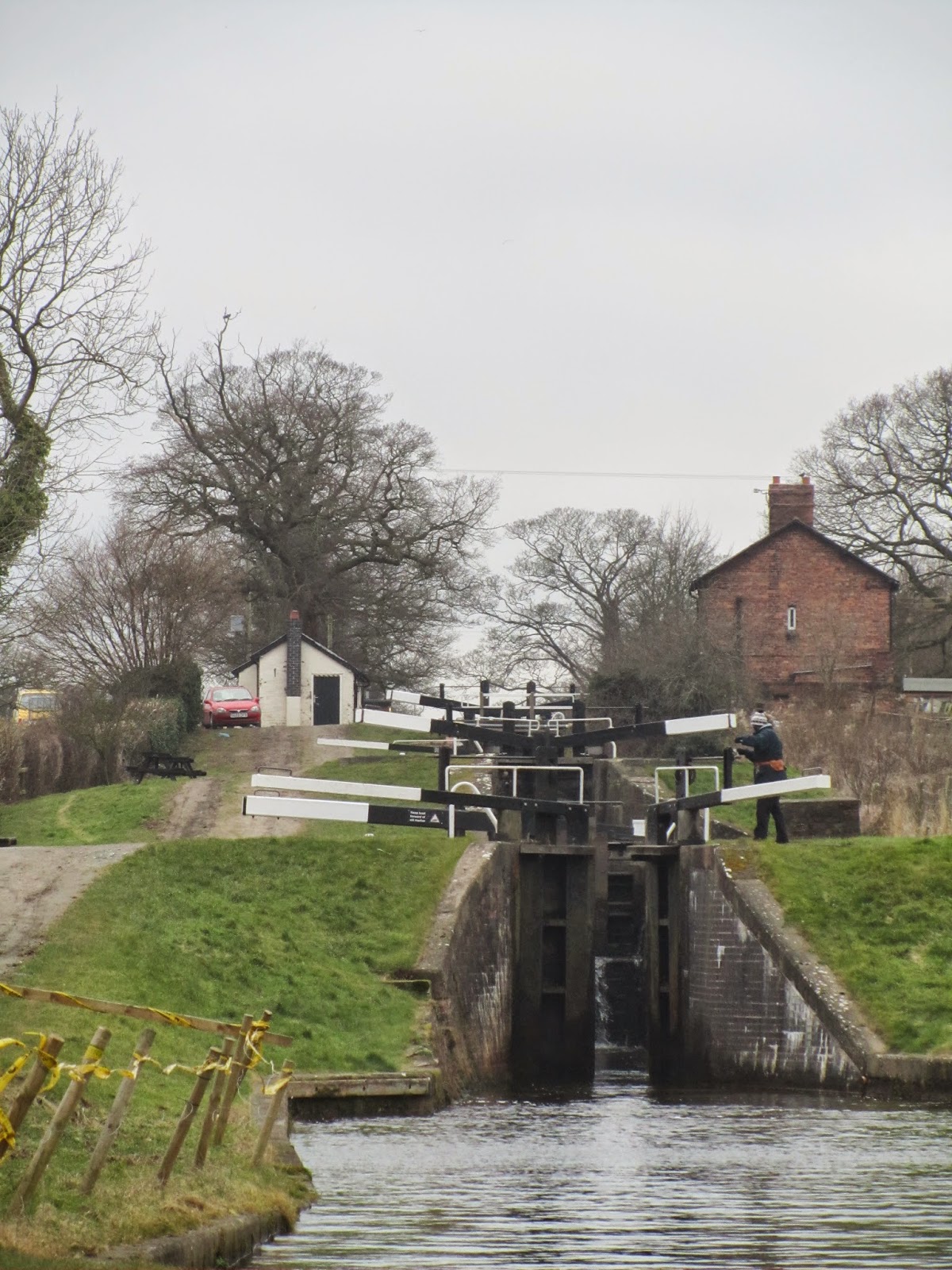 Unfortunately the second pound up was so low there was not enough water to get out over the top cill. So while Jill ran up and down the locks, furiously wielding her windlass to run enough water down to enable us to proceed, I had time to survey the surroundings. 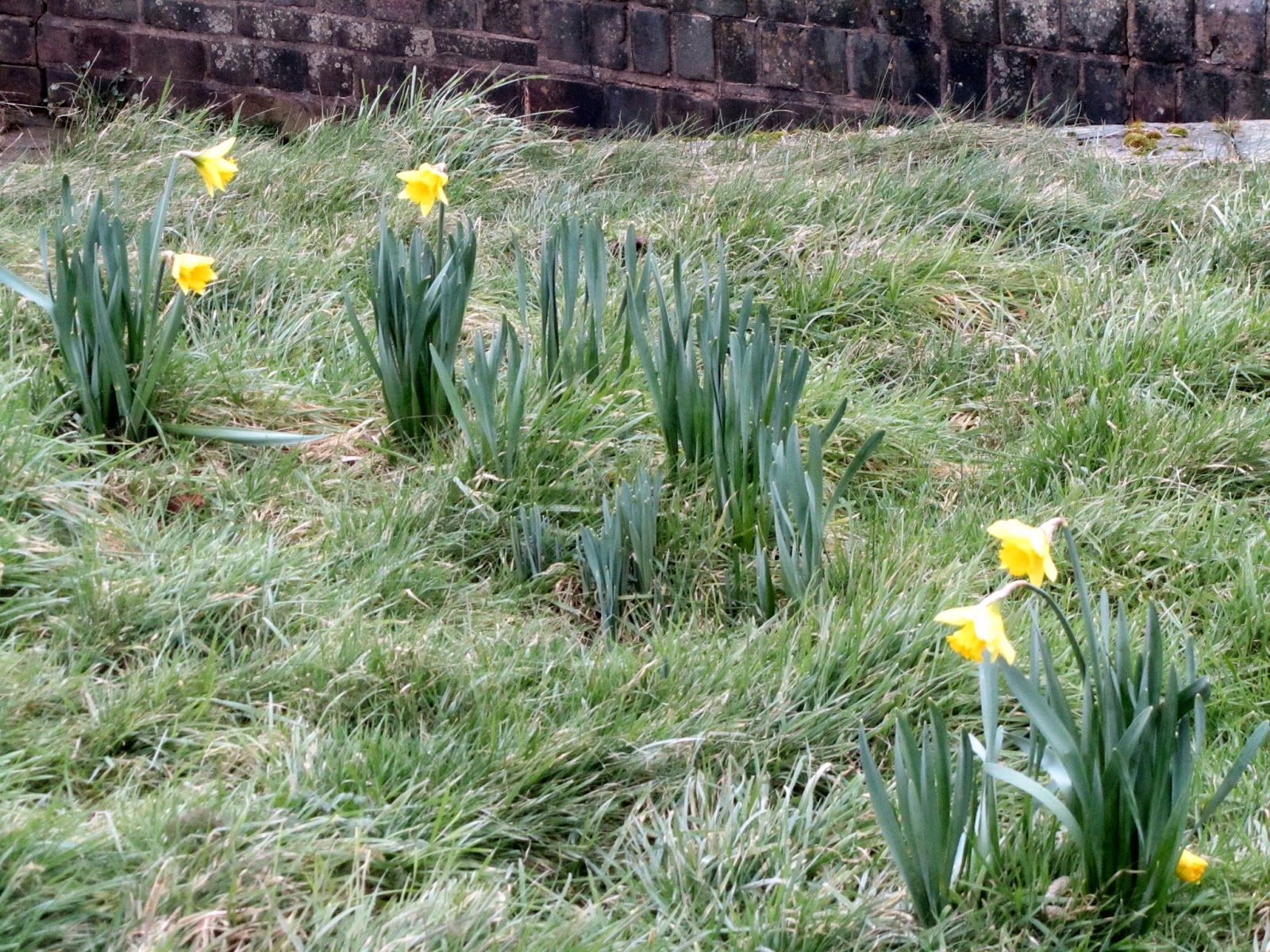 Well we are heading into Wales. 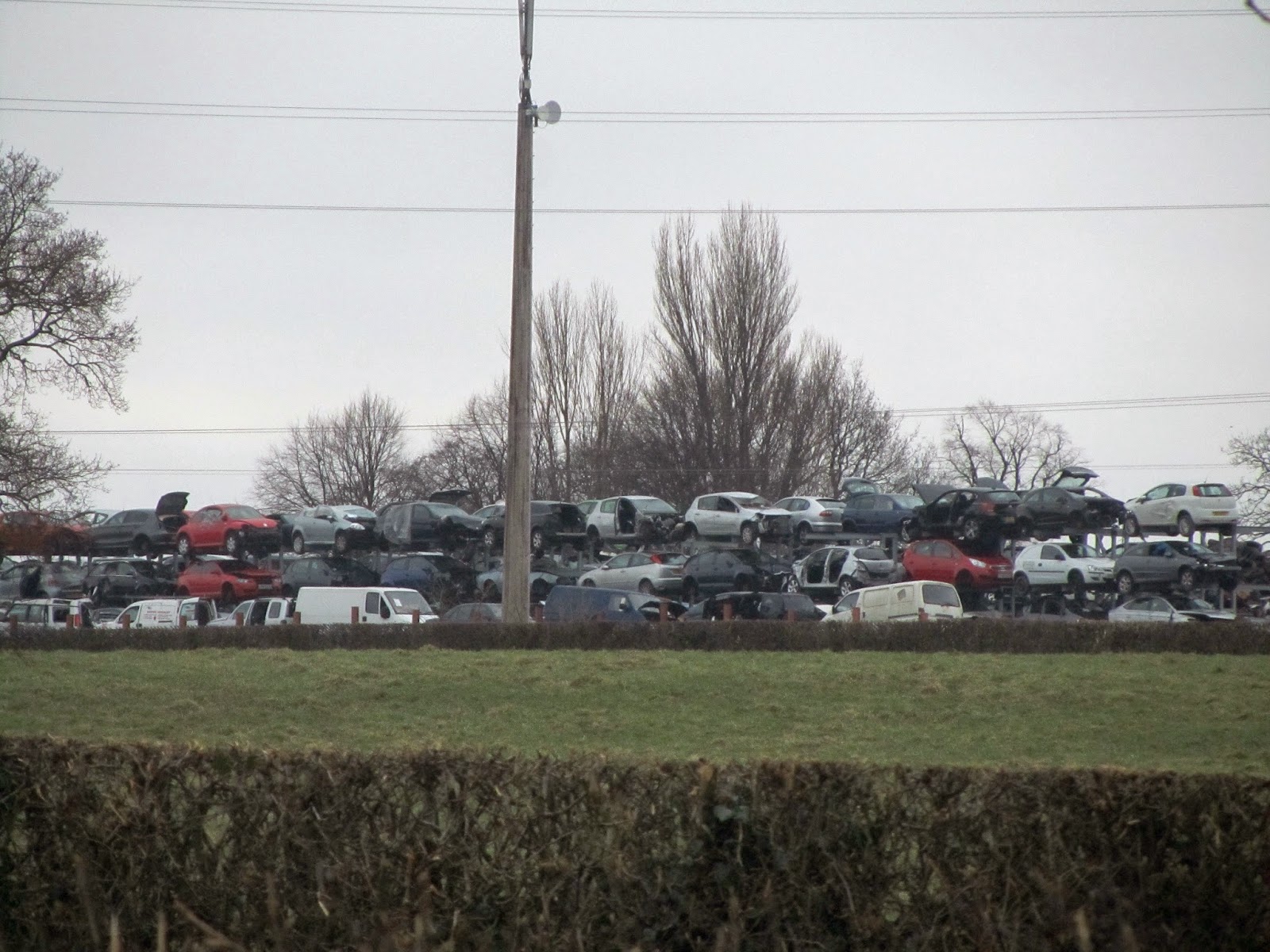 I wonder how much higher they can pile the cars in the adjacent scrap yard? Three high at the moment. 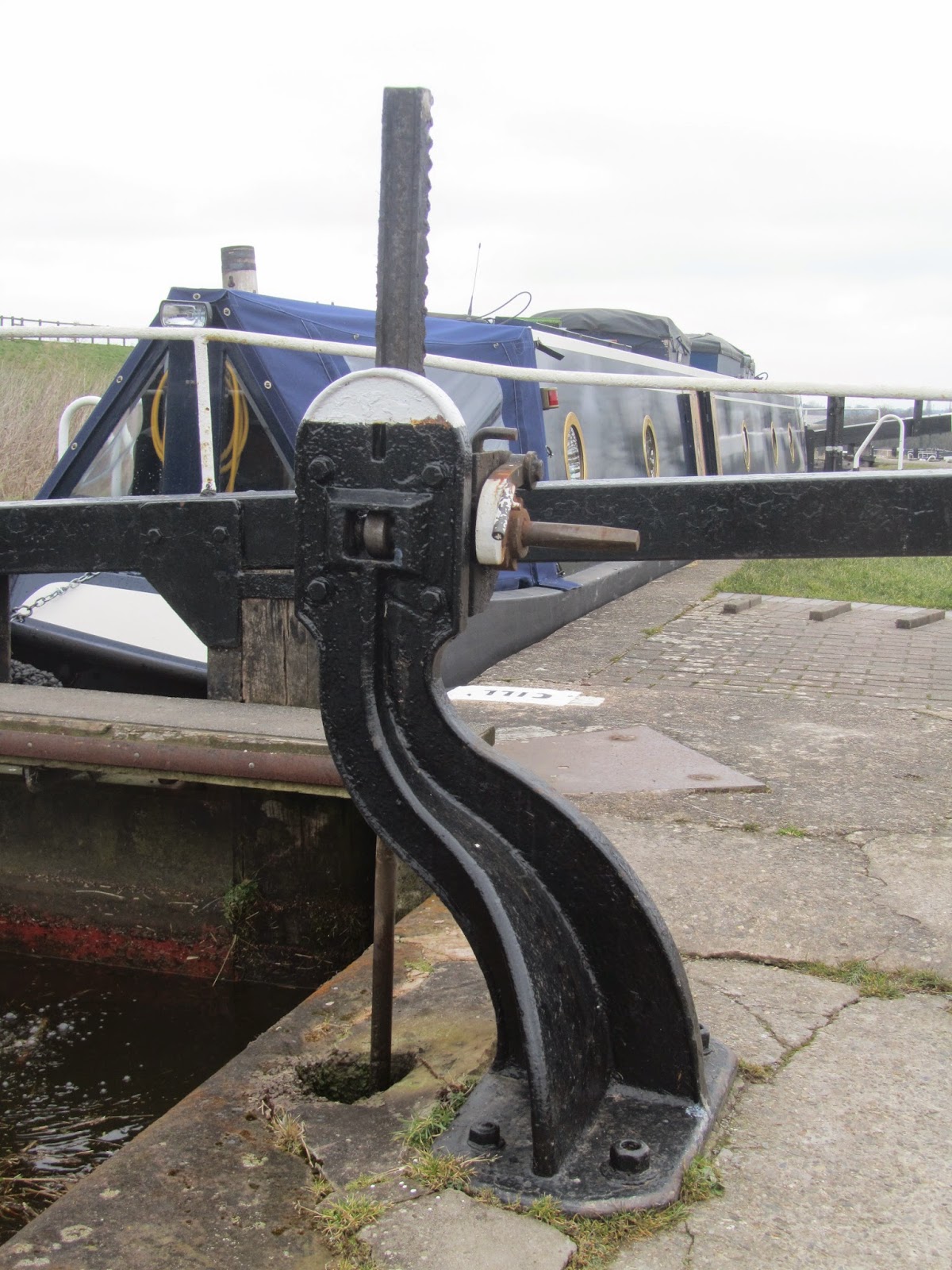 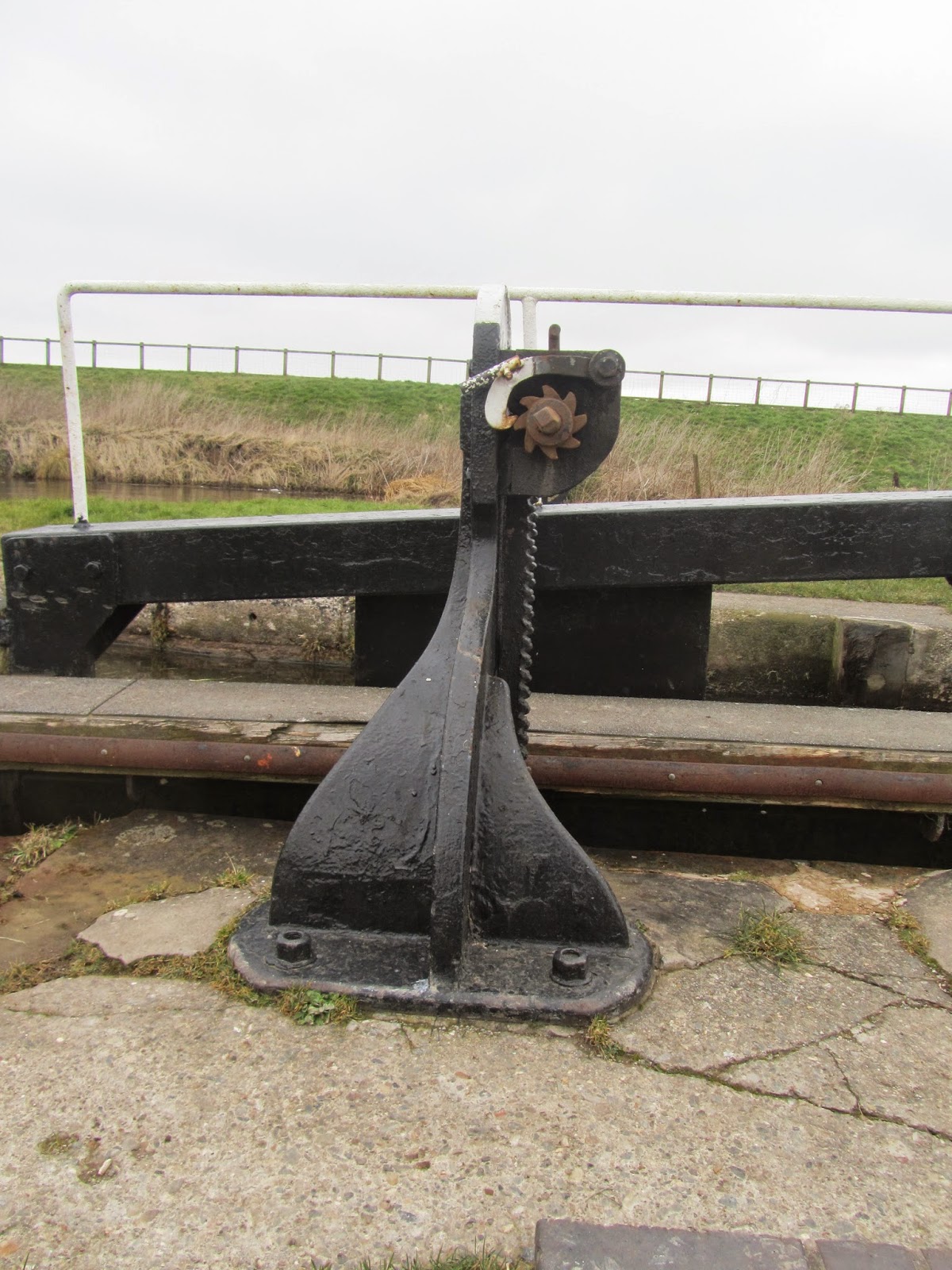 This must be the most sinuously sexy paddle gear on the system. I wonder what the idea was? It is on the third lock up. 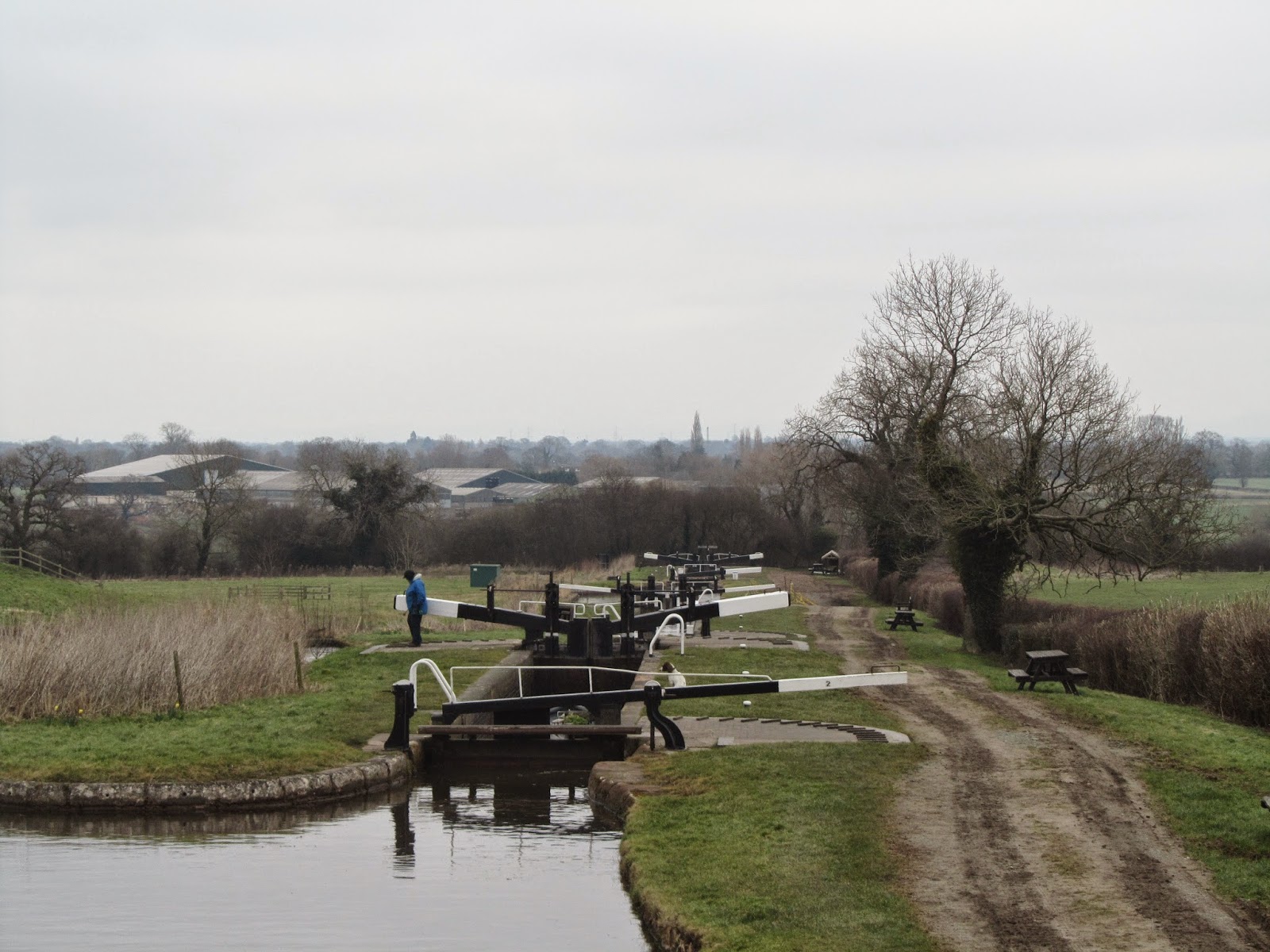 Looking back down the flight, the view is somewhat dull on a cold, cloudy winter's day. On a fine summer's day it is fantastic.
By the time we reached the top we had decided that we had been cold for long enough, so when we reached the S.U.C.S. moorings by bridge five we called it a day.